Chapter 15 is live and we’re coming in hot with the best of the best from the team at FIST Handwear.

From amphibious creatures, to the sweetest of treats, we’ve got you covered with all the premium features to ensure we continue to offer you superior wear without sacrificing feel.

Introducing the Croc, Snakey and Blow Up Glove. We also bring you anarchy in a glove with Fistarchy, The Palms and Sun Flower.

We are welcoming some new additions to our hot and cold weather resistant glove range, plus loading you up with all new styles in both crew and moto socks.

It’s safe to say, we’ve got a fair bit going on in the very best way with our Chapter 15 Red Label Gloves. Featuring Logan Martin’s actual nightmare, Robbie Maddison providing us with the freshly baked goods, Indy Carmody has some sweet candy treats and Scotty Fitz has gone absolutely skitz. And of course, Puppies.

When the gloves and socks are just not quite enough, we are stoked to bring you a full range of Tee’s to go alongside your favourite pieces from the range.

Online and instore now, don’t wait to get your hands on the Chapter 15 range.

2021 has started with a bang with the announcement of four epic additions to the #FISTARMY.

Dean Lucas is changing the Mountain Bike game, doing what he does best in the Downhill MTB scene, producing nothing but epic results. After a big 2020, we can’t wait to see Dean rip in this year.

Freestyle Mountain Bike Shredder DJ Brandt also joins us this year to bring a taste of FIST into the MTB Freeriding world. Whether it is his dirt jumping, or his insane freestyle terrain riding, we’re so keen to have him as a part of the crew.

Starting on the track, and making his way to the ramps, Wanky has launched his individual flair into the FMX world. With one of the biggest Whips in the game, Wanky has claimed a pair of  X Games silver medals and a Monster cup Biggest Whip title, Wanky joining the #FISTARMY is a huge move for us!

Last, but certainly not least, we welcome one of the Worlds finest- Mariana Pajon. With 18 BMX World Champion Titles, two Olympic gold medals and numerous Athlete of the Year awards, just to name a few, this BMX weapon is such an amazing addition to the team.

With Chapter 15 just around the corner, and so much more in the works, 2021 is going to be one of the biggest on record! So strap in and get ready for the takeover of the #FISTARMY.

By Isobel #FISTARMY, SMASH FORTH, Uncategorized

2020 has been a wild year, and what better way to finish it off than with the release of FIST Handwears’ Chapter 14!

Chapter 14 is here and the team at FIST Handwear can’t wait to see you get your hands into these epic designs.

Featuring all of our premium features to ensure our gloves are a superior wear without sacrificing feel, and fitted with one of the most durable man made synthetics on the market, we’re all about supplying the world finest MX, MTB, and BMX Gloves.

Say hello to some new members of the FIST Family with the El Cobra Loco, Covert Camo and Miami: Phase 2. As well as welcoming back our Cold and Hot Weather resistant gloves with the Frosty Fingers and the Breezers.

We’re stoked to introduce you to our Chapter 14 RED LABEL range. The Wizard is back, Caroline Buchanan’s Sprinkles have gone intergalactic, we also welcome Medium Boy to the FISTARMY with his thirst quenching signature glove, as well as Dylan Long serving up some juicy burgers and Jaie Toohey going Neon!

Just when you thought we were finished, Chapter 14 also brings you our very first run of FIST Crew and Moto socks that are guaranteed to be your new favourites. All to match your favourite designs from the Chapter, we also introduce our range of Grip Donuts.

Online now and moving fast, hit up our website now and get yourself a piece of Chapter 14. 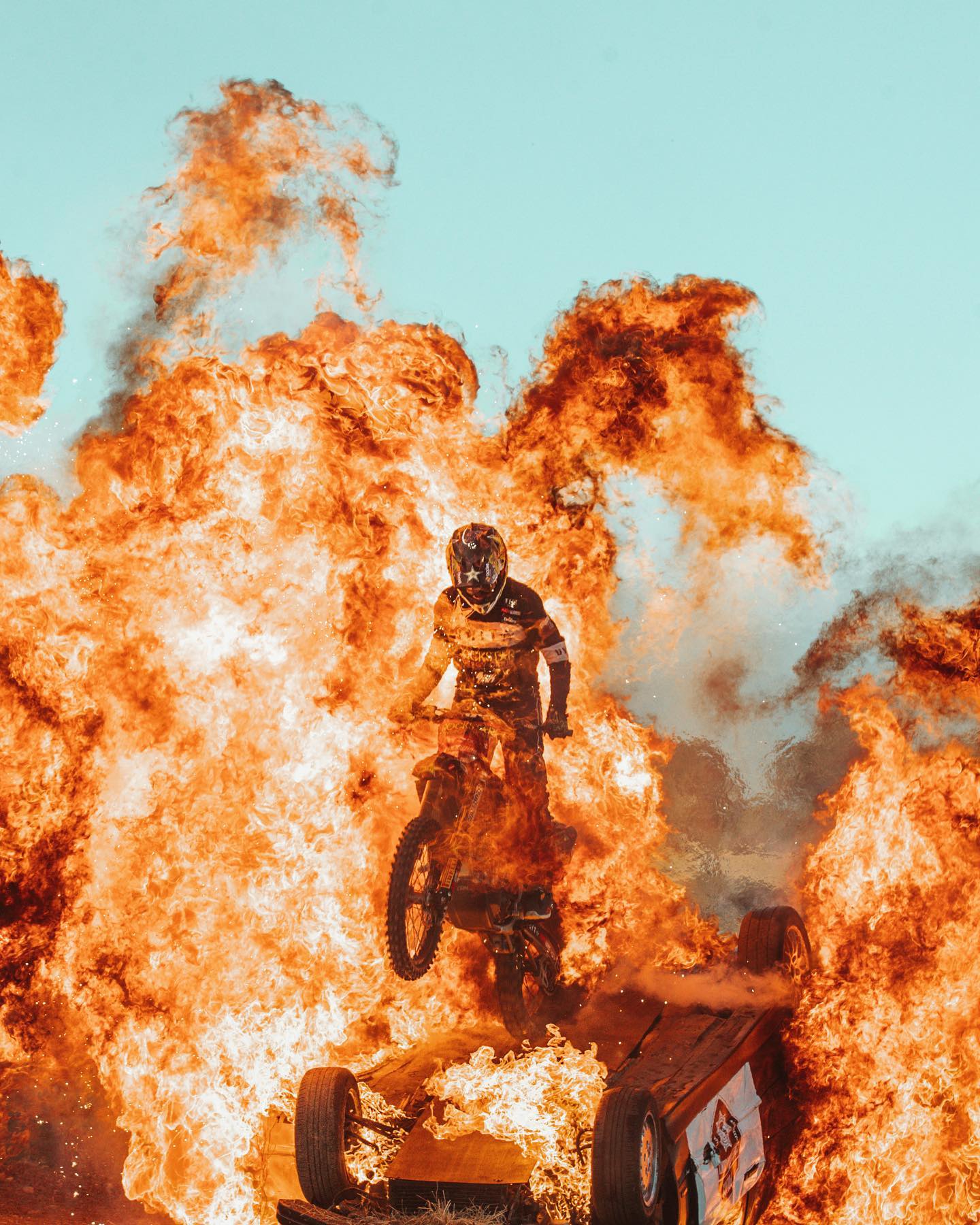 Two times X-games Gold Medalist Corey Creed has released his X Games Real Moto part 2020. Alongside some of the worlds best, our FIST ARMY legend has fired up the field in the best way.

With X-games Real Moto being the only major competition to go ahead in 2020, the heat has well and truly been turned up by Creed and his team.

90 Seconds of free will and the most out of control edit of what Moto means to you, in collaboration with Allan Hardy, Hype Republic and some of the best creatives on offer, it is guaranteed to blow you away.

After months of work from the team, the video is finally live and ready to go up against some of the worlds best in this years real Moto competition. 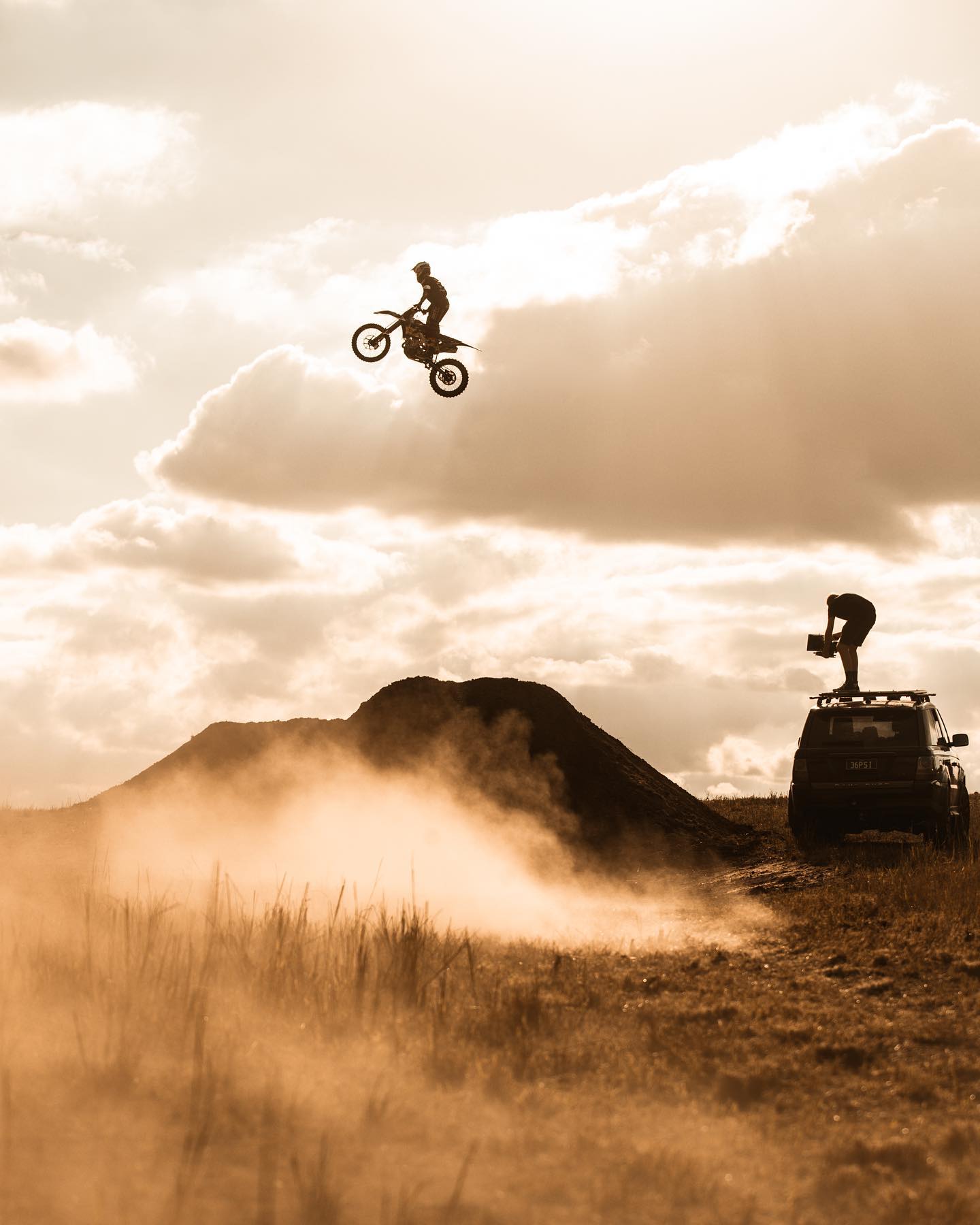 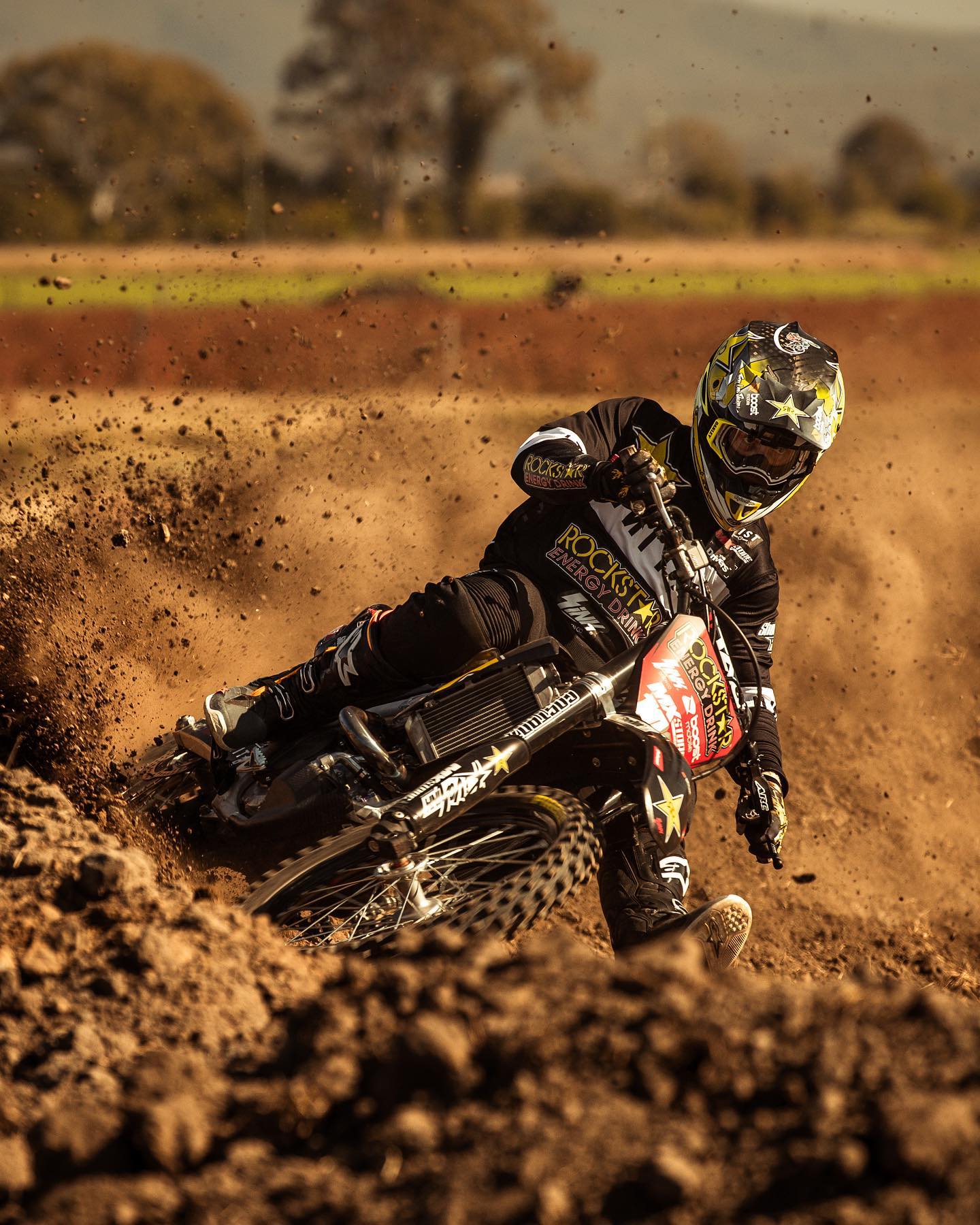 “I want to blow people’s minds, I want to confuse people and i want to get them excited, and I reckon that’s what we’ve made here.” – Allan Hardy

Voting to take out the Fan Favourite title is live now on the Xgames website, so jump online and place your vote for Corey. The FIST team are super proud to be a part of this wild ride, and can’t wait for you all to watch this epic video and to get your votes in. 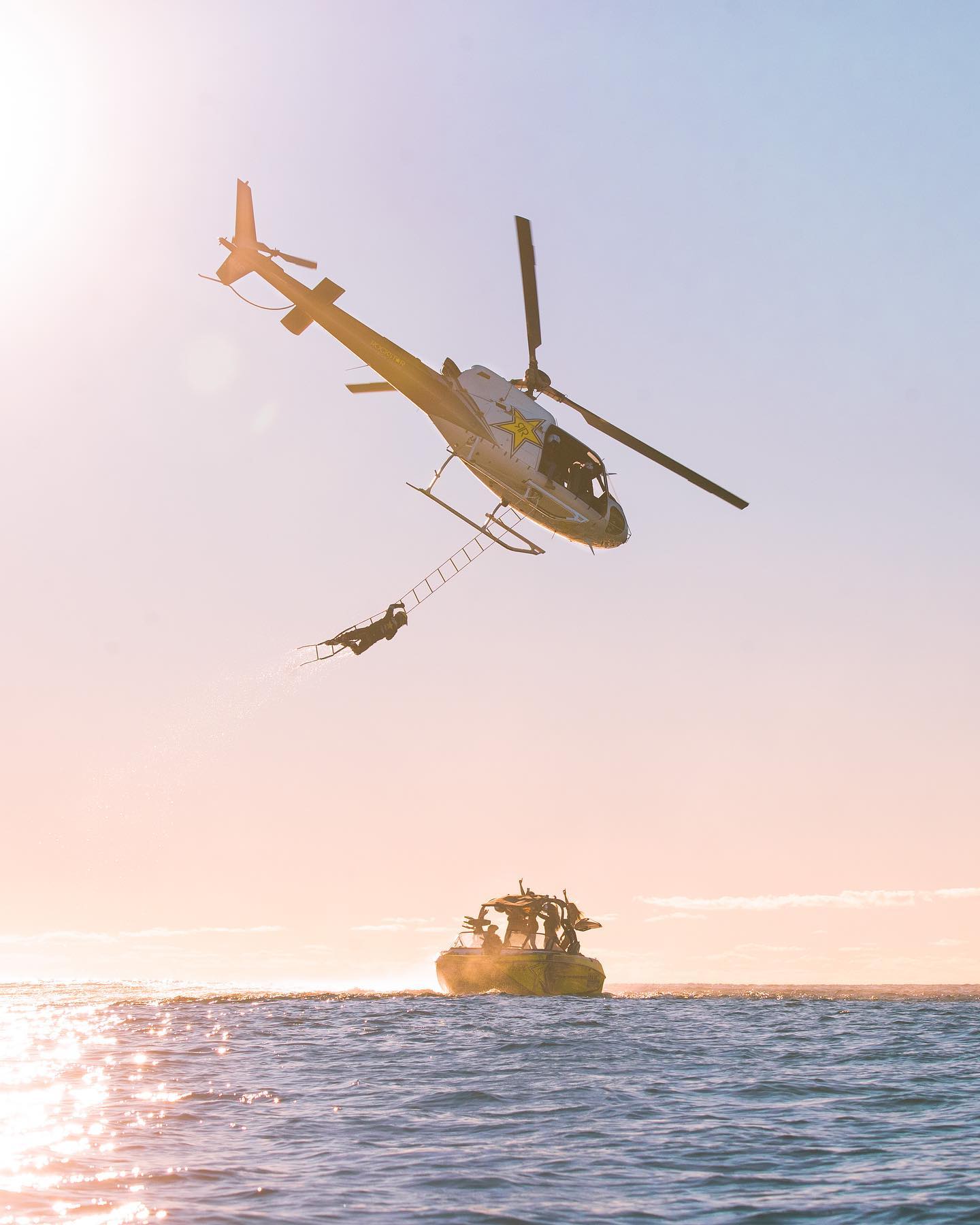 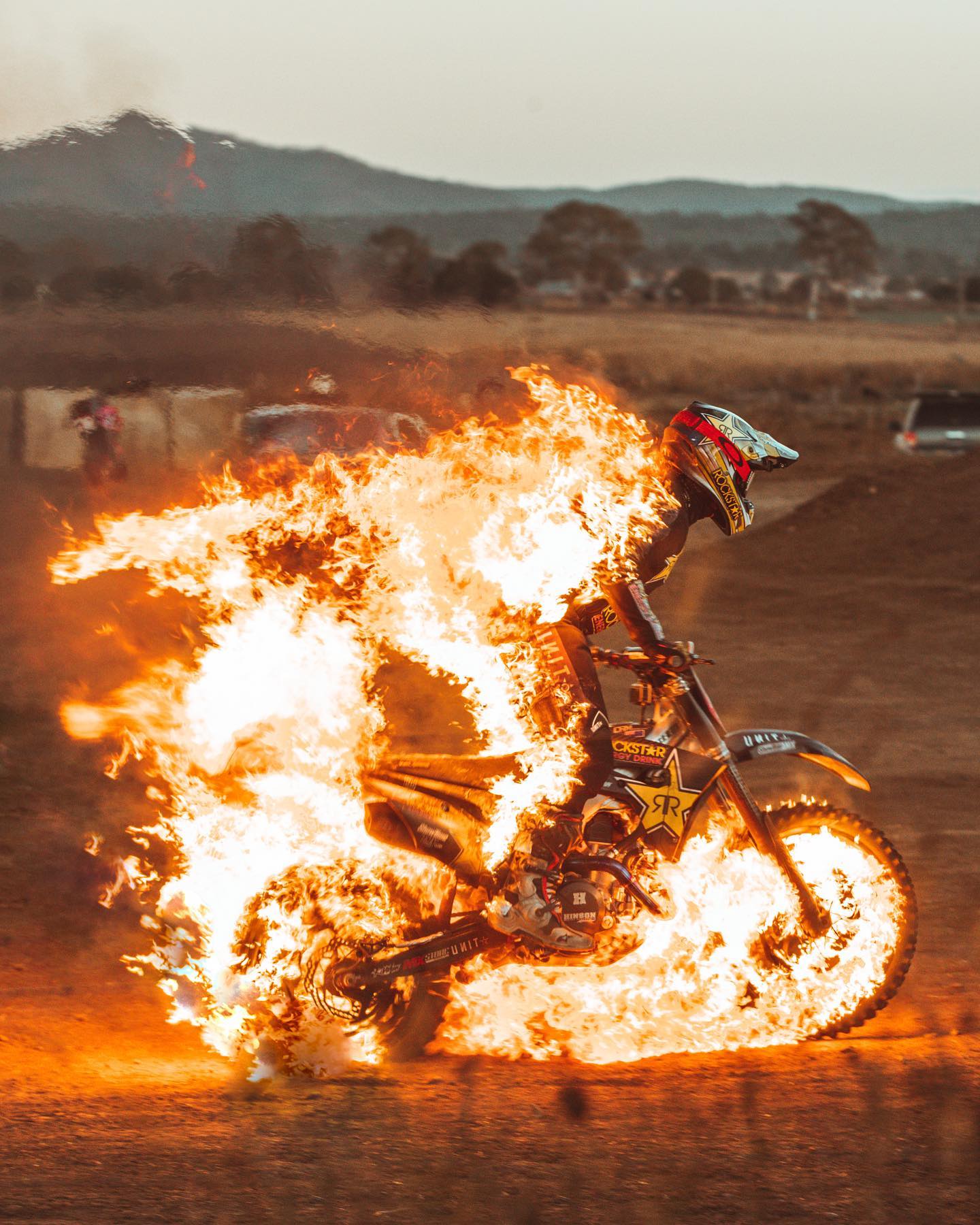 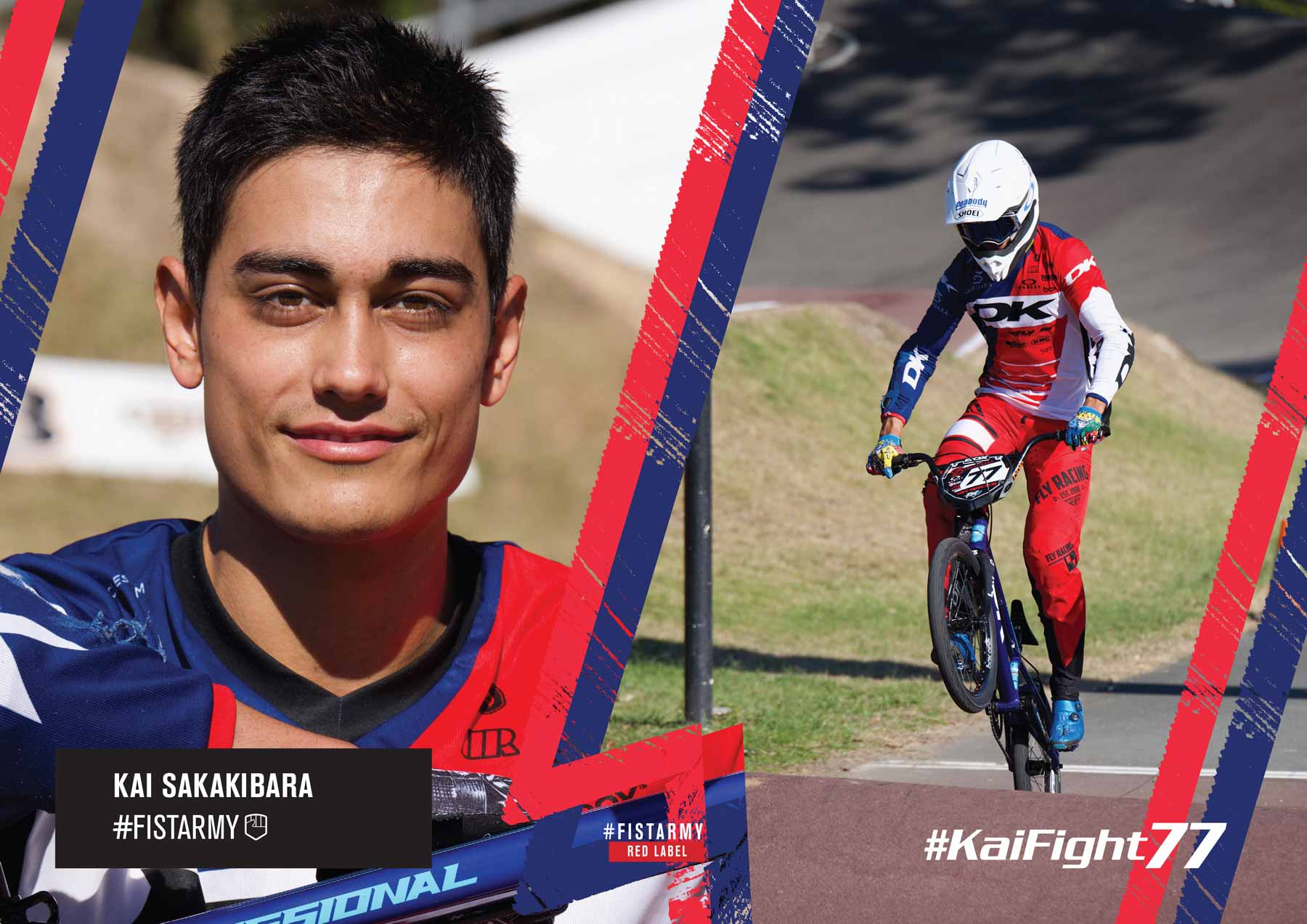 FIST JOINS IN ON THE #KaiFight

FIST Handwear is proud to announce the release of the #KaiFight77 Red Label Glove, with every dollar made from the sales being donated to Kai to aid in his recovery.

Our FIST Army brother Kai Sakakibara went down in a big way at the BMX World Cup in February. He spent weeks in a coma and has just recently been released from Hospital. Kai is making amazing progress, but still has a long road ahead of him.

With help from FIST’s great friend and talented tattoo artist Carly Kawaii, these gloves were created to raise money to aid in Kai’s Fight in any way we can. 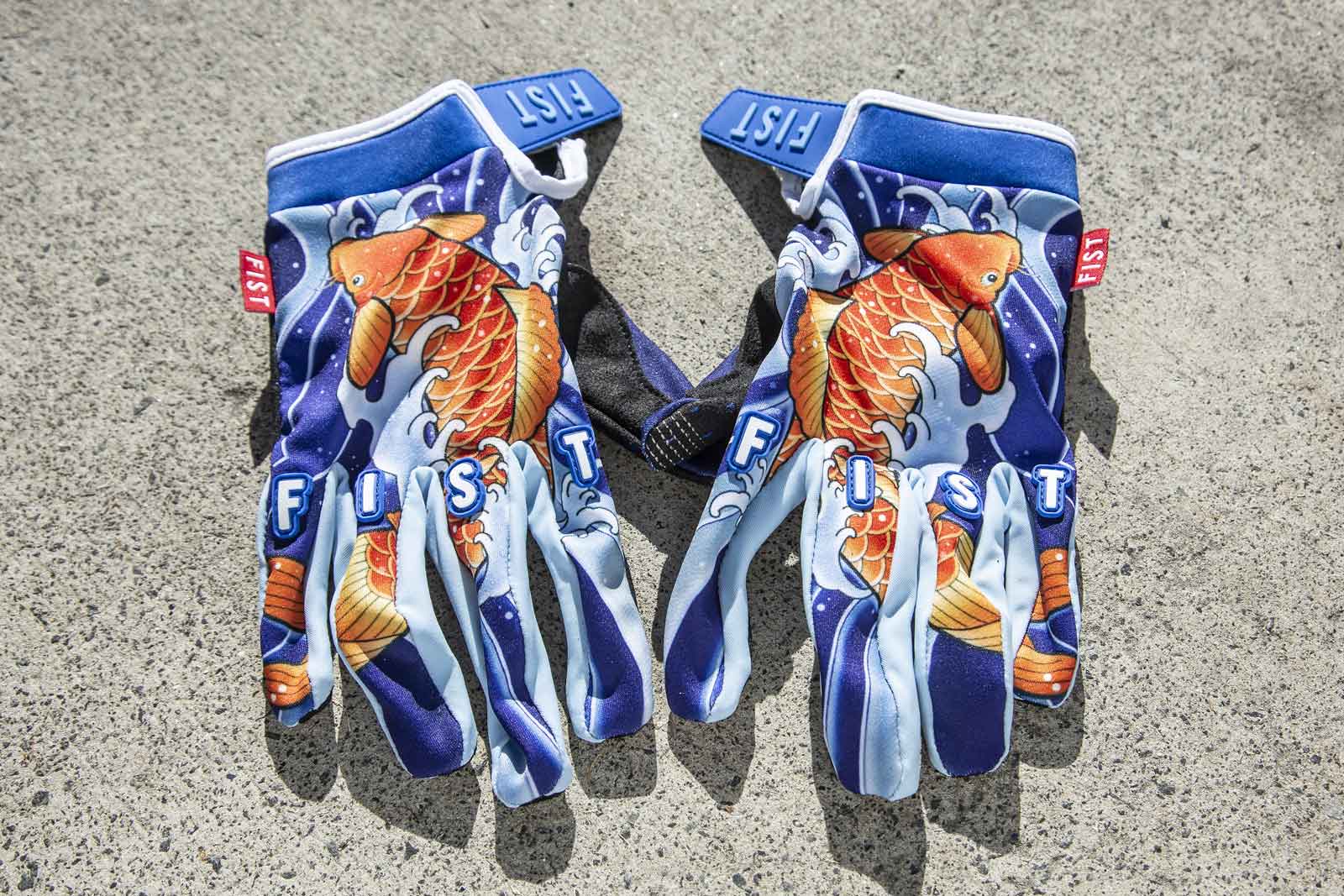 After an overwhelming amount of support, in just one week, almost one hundred pairs of the #KaiFight77 gloves were sold and FIST were able to send Kai over $4000. With more gloves still available online, this amount will continue to grow.

Launched on Kai’s Birthday, these gloves are available in both youth and adult sizes and are currently an Australian exclusive, but will be available globally as a part of our next chapter of designs towards the end of the year.

FIST Handwear would like to thank everyone for the amazing show of support for Kai, and with limited stock still available, we’d love you to jump online and grab a pair while stock lasts. 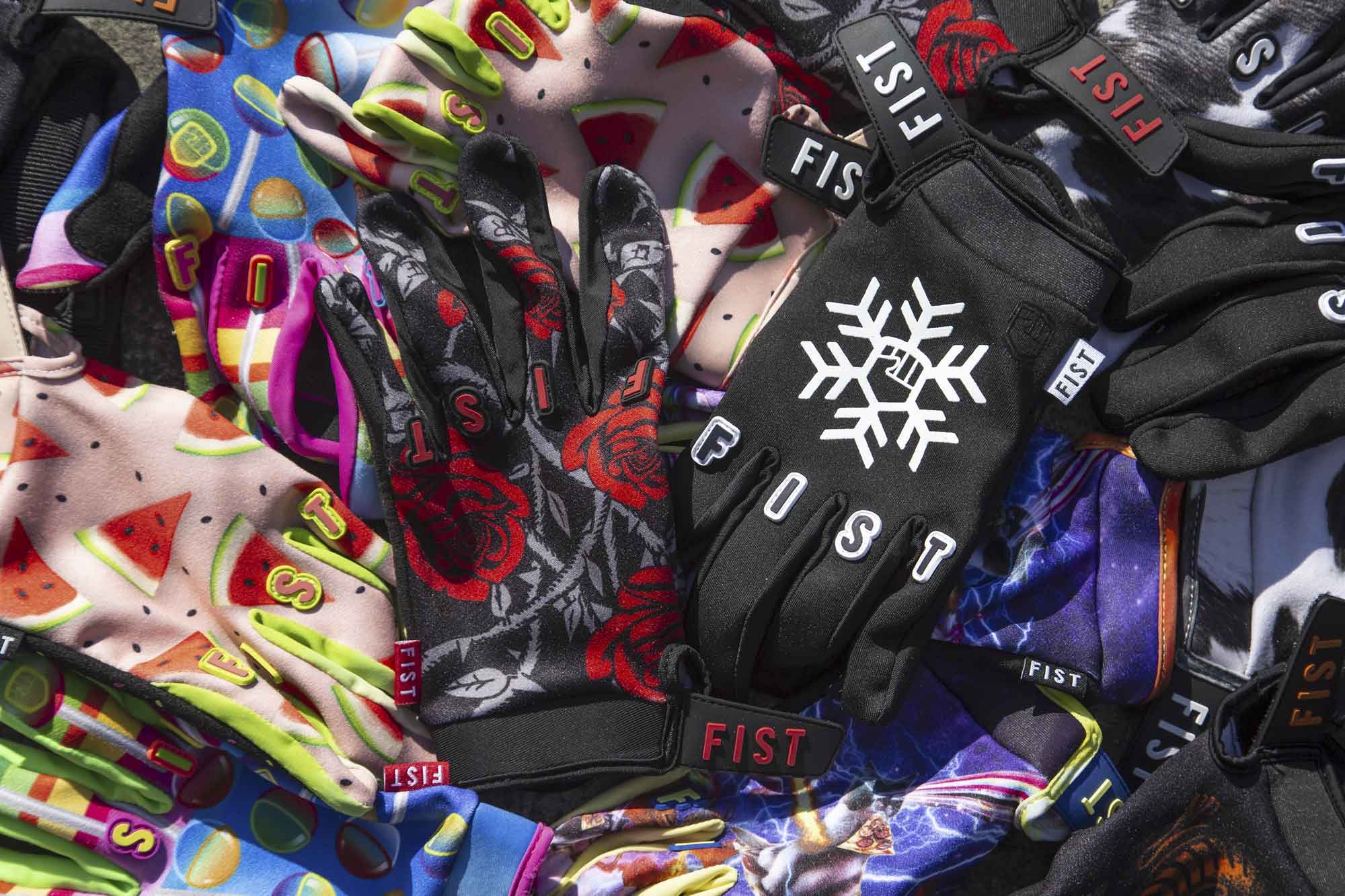 FIST Handwear, suppliers of the world’s finest MX, MTB, and BMX Gloves, are stoked to bring you Chapter 13! 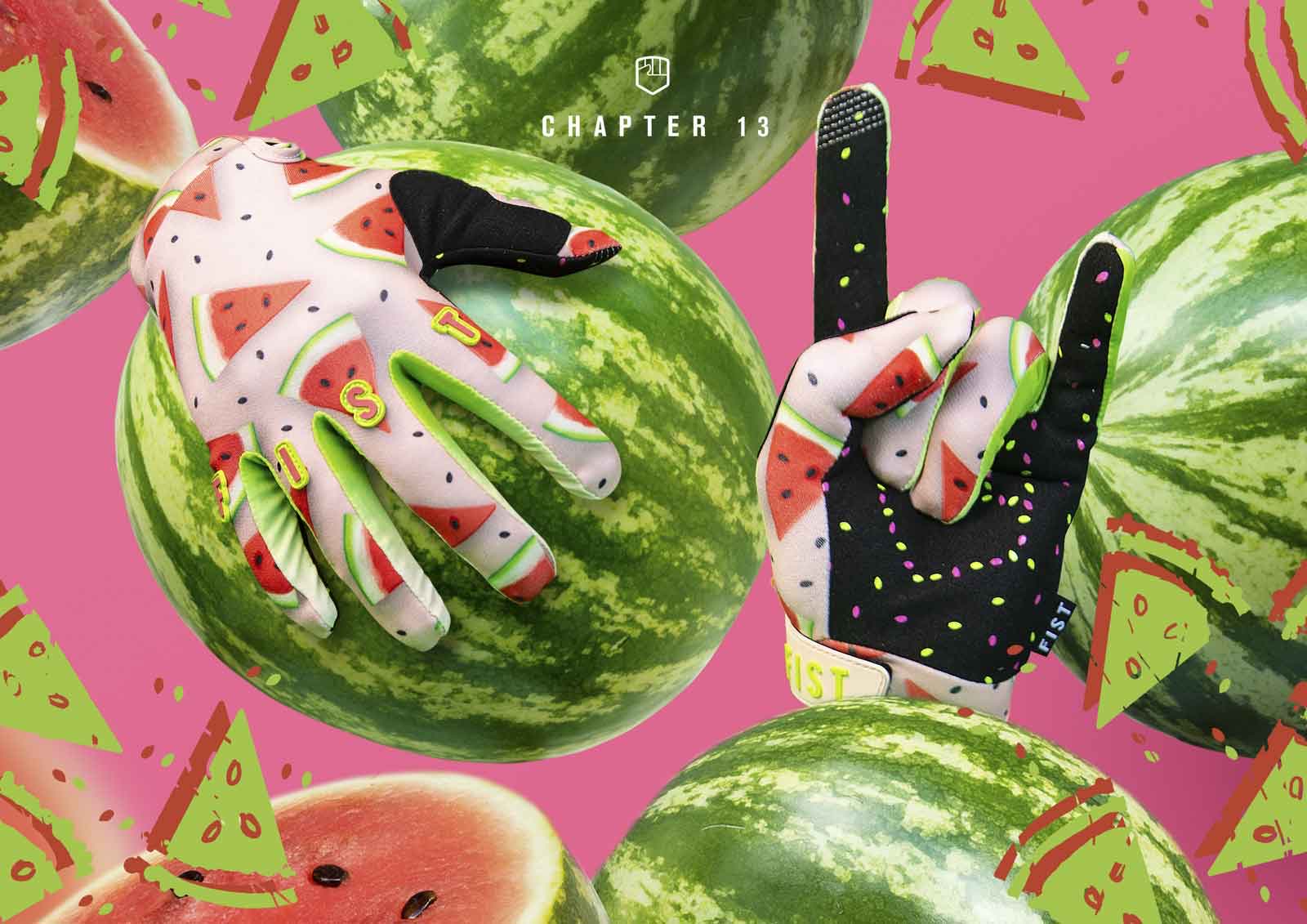 The Designers at FIST HQ bring you some epic designs from Chapter 13. Introducing the Fruity Watermelons, the Moo and the illusive Pizza Cat. We are also hitting back with some of our best sellers such as the Black Stocker, The Frosty Fingers Cold Weather glove, as well as the new, super cool Breezer Hot Weather glove. 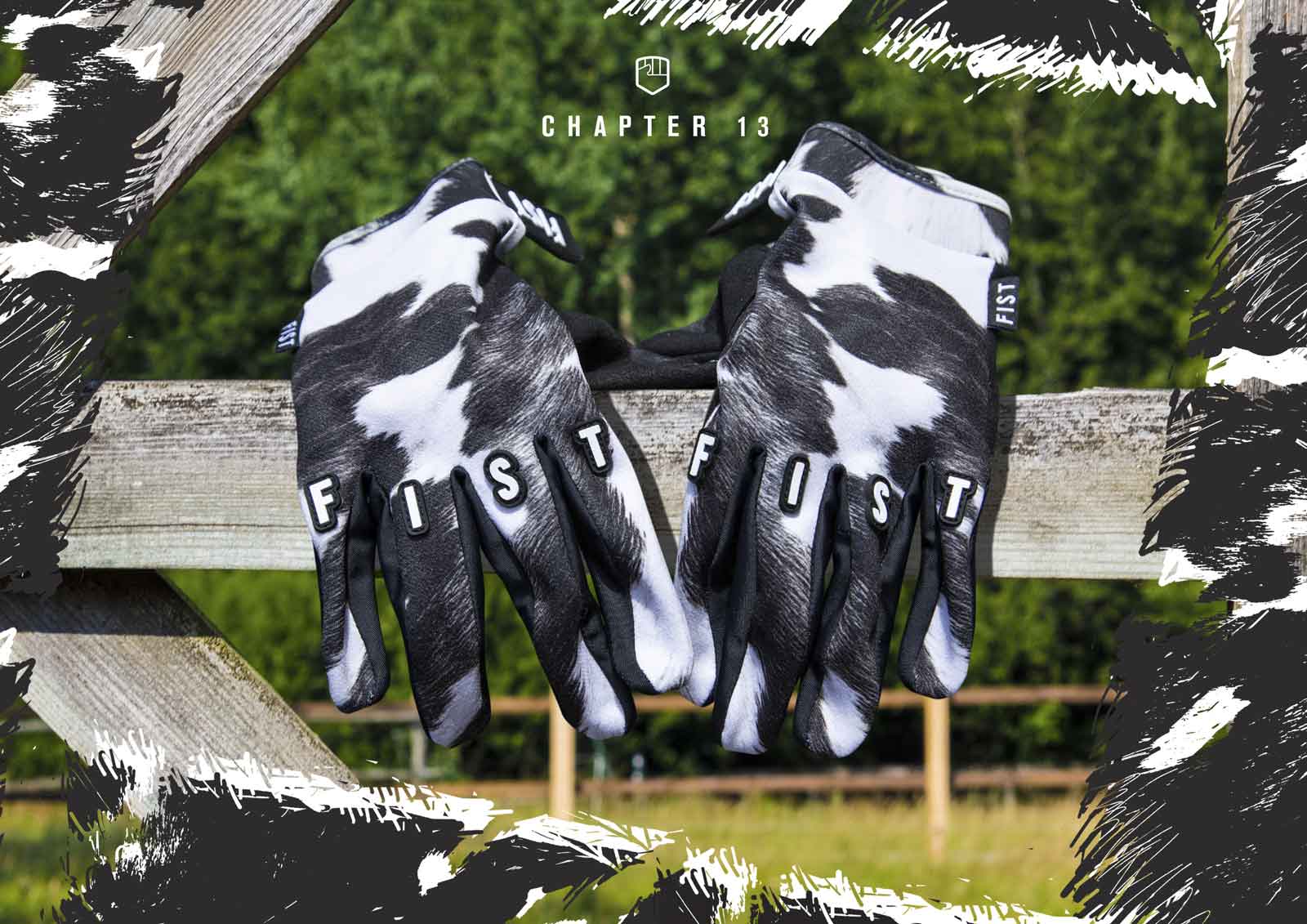 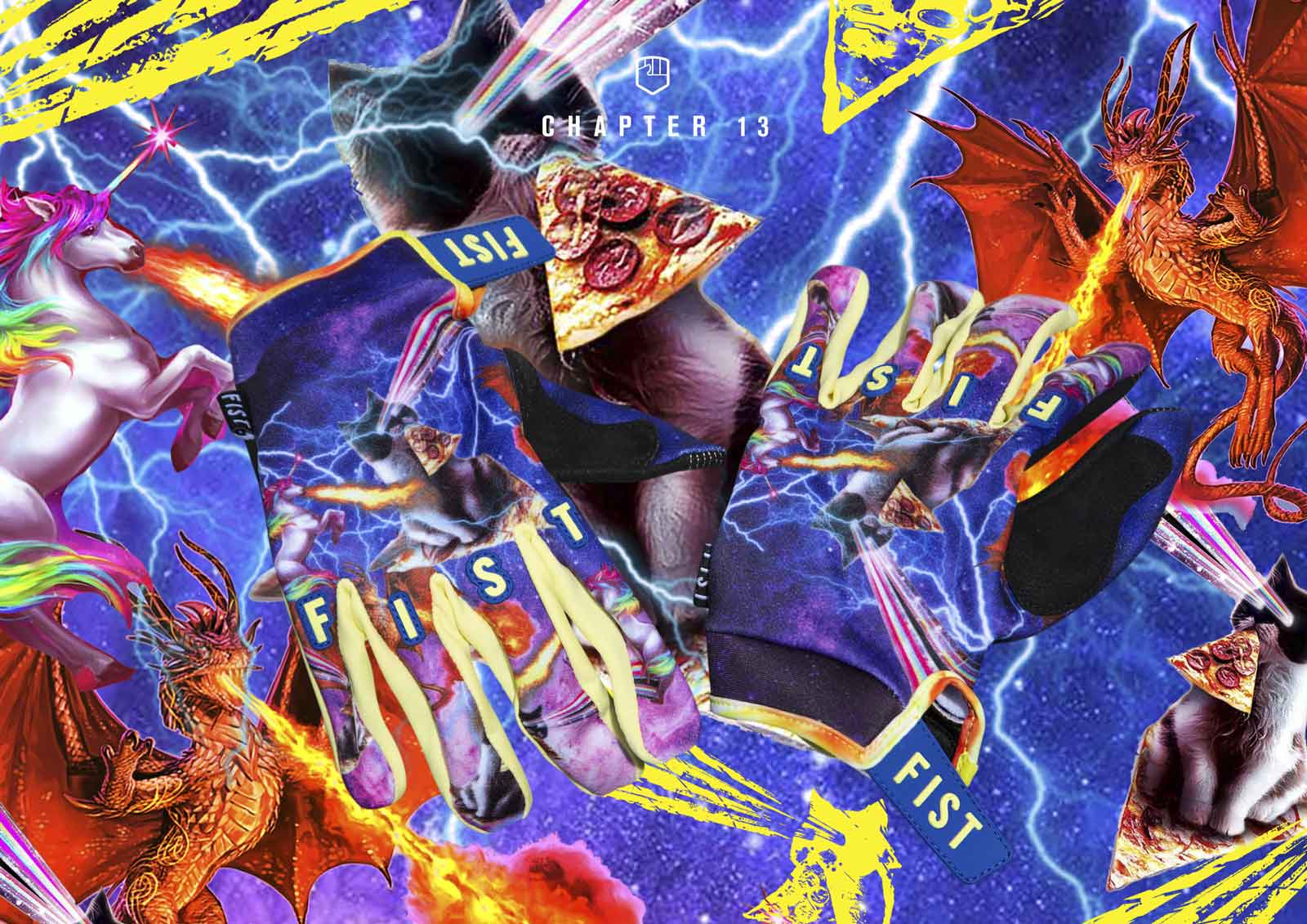 Made with one of the most durable man-made synthetic leathers on the market, the pre curved Clarino palm makes for superior wear, full breathability and flexibility, without sacrificing feel and keeping the gloves firm fitting to avoid bunching or blistering.

These all-weather gloves are fit with sublimated twill spandex uppers and tacky silicon print on the palm and fingers to offer full breathability, supreme comfort and maximum grip even in wet weather. 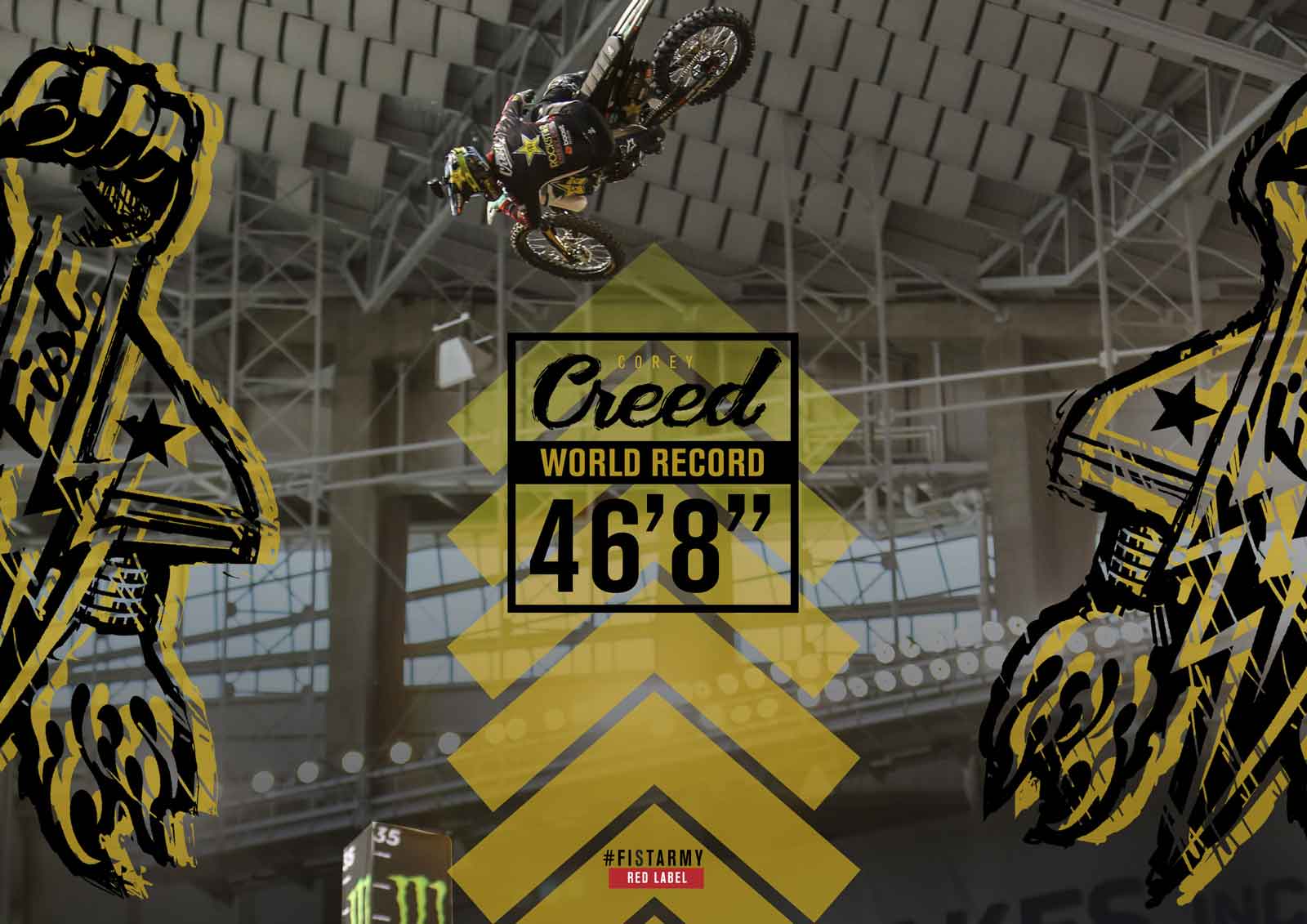 These, as well as a bunch of other styles are available now, and surely won’t be around for long. Head to the FIST website or hit up our worldwide stockists to grab yourself a pair or two. 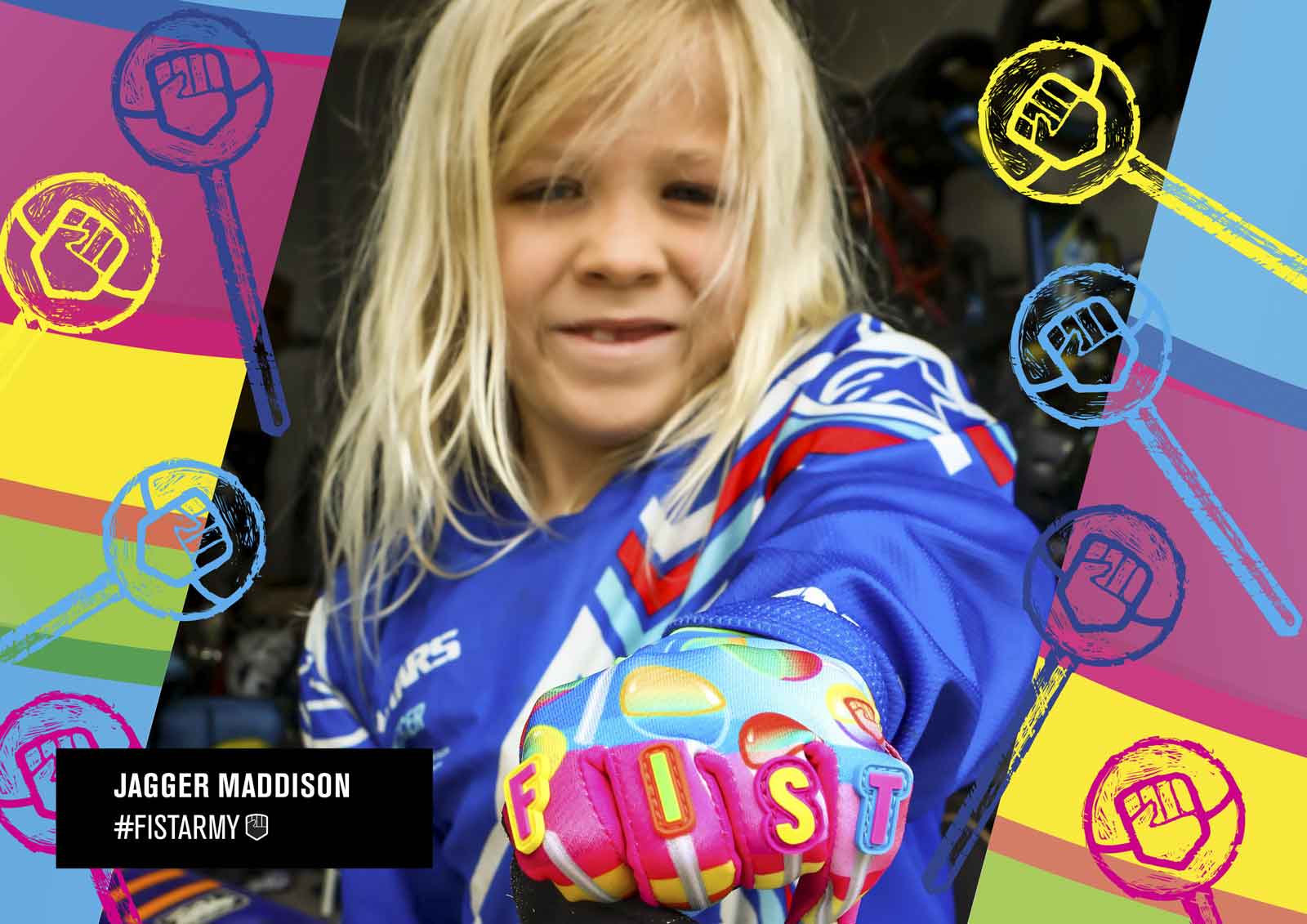 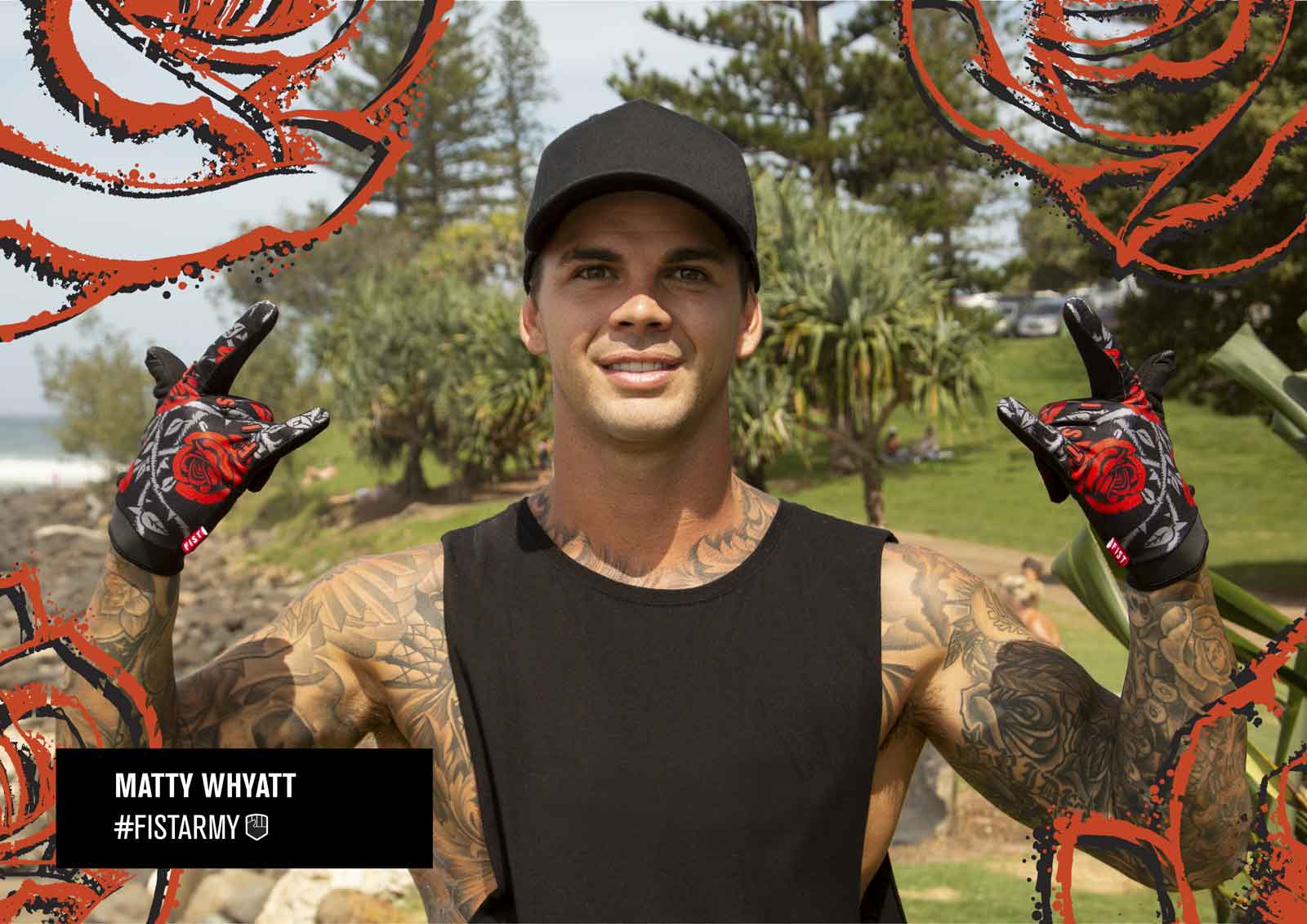 By brcks SMASH FORTH, X GAMES 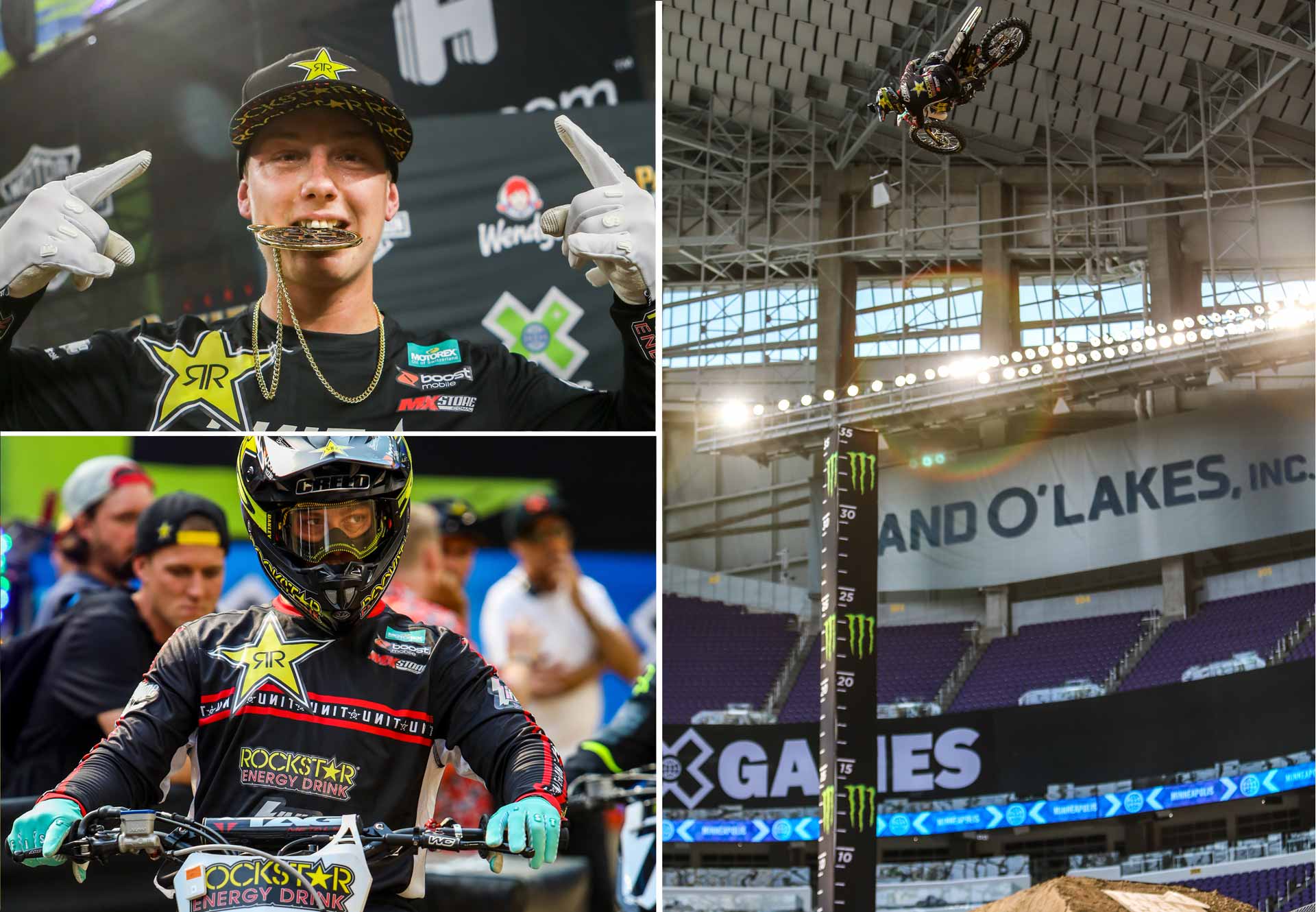 Logan took his first victory winning gold in BMX Park, and then in BMX dirt.. Brandon Loupos (Silver) sets the bar with a score of 92.00 on his first run, then Logan comes out and scores 94.66 on his last run winning double gold! 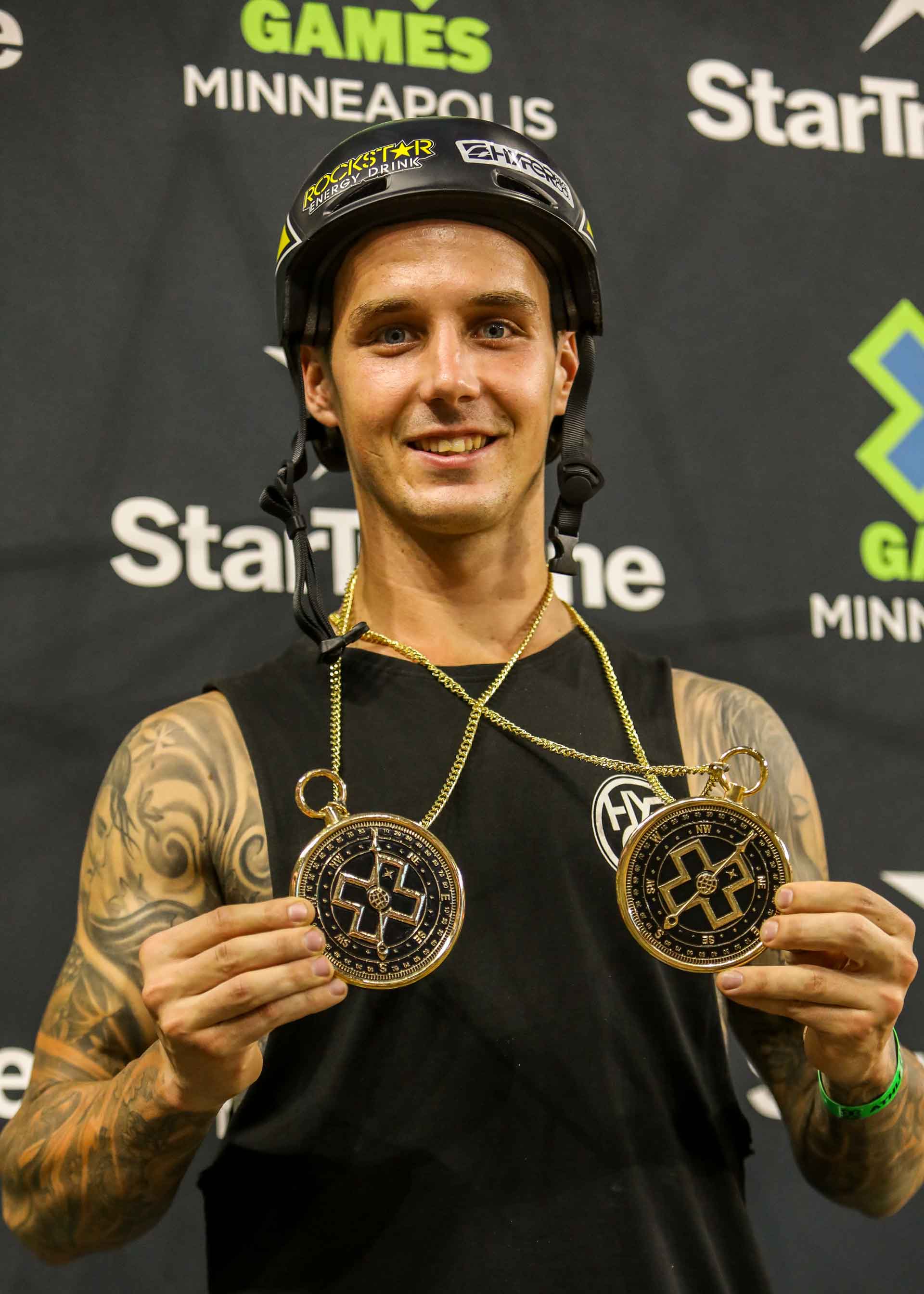 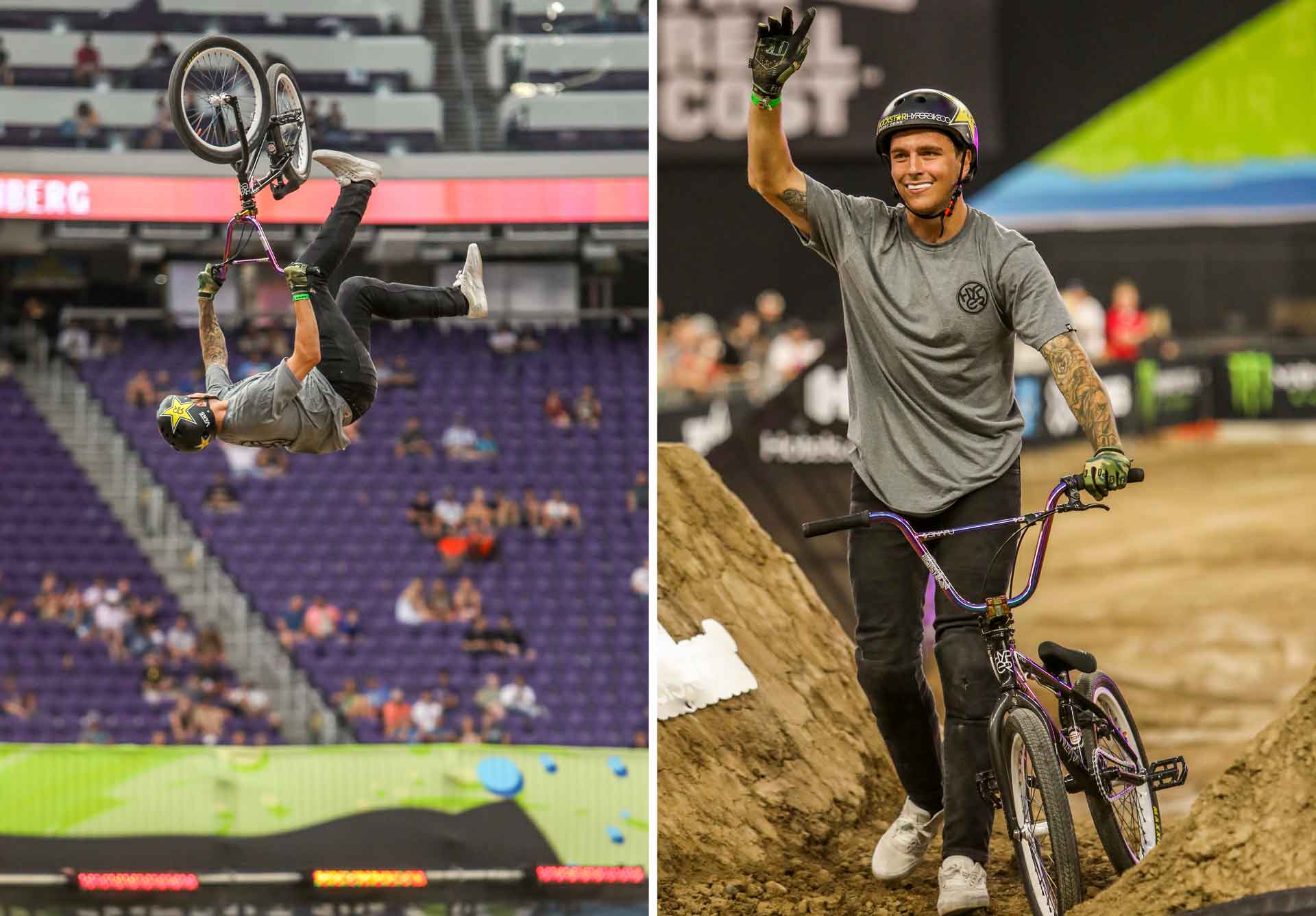 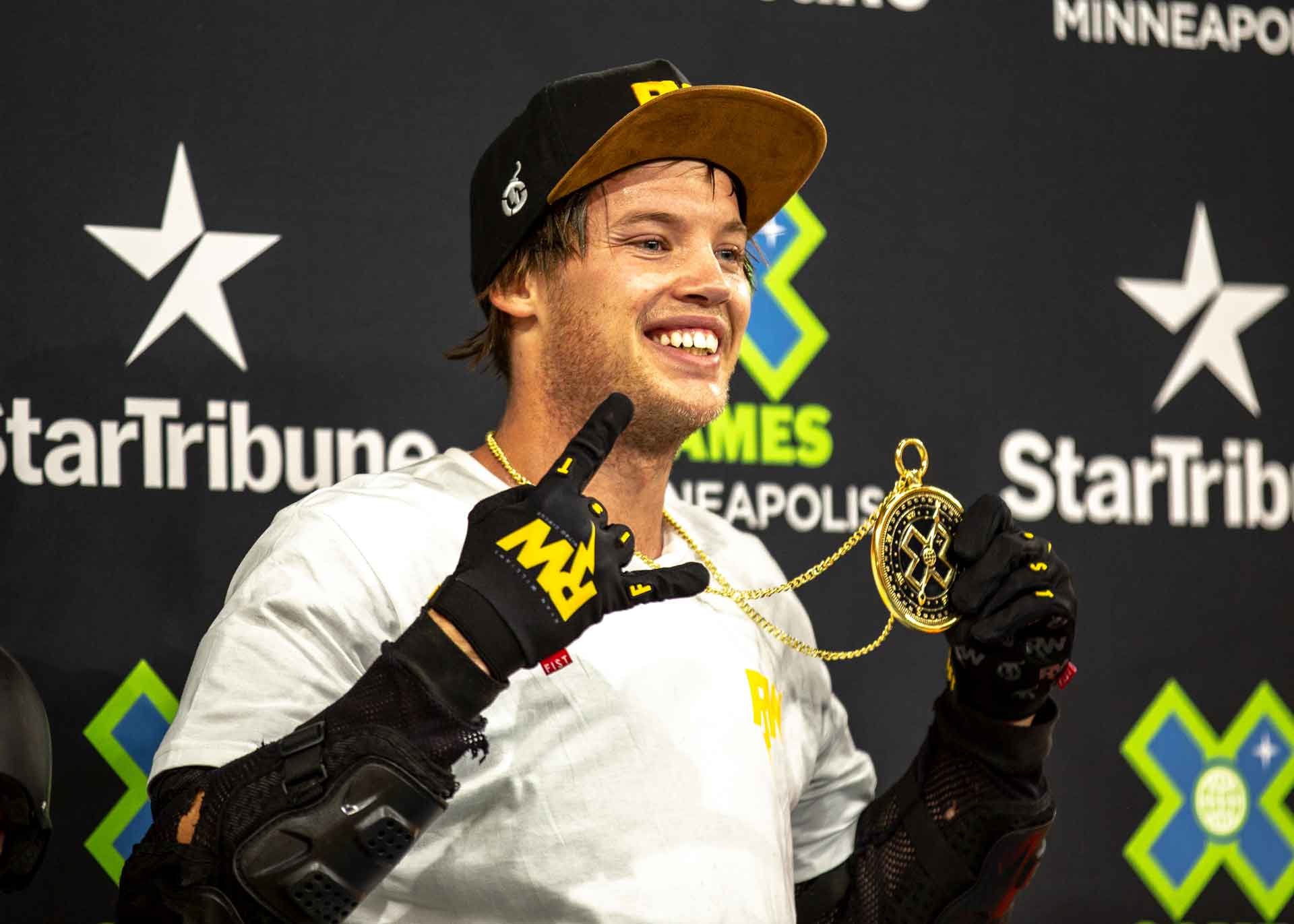